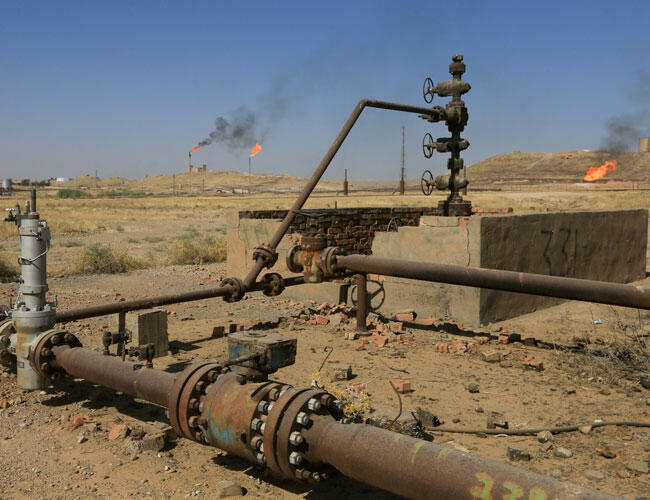 UK courts started hearing the first ever criminal trial in the UK of employees of an intermediary company that is charged with paying bribes on behalf of large Western oil companies..

A newly formed Iraqi Ministry of Oil (MOO) was tasked with creating a master plan to fix the country’s dilapidated oil infrastructure and to more than double the country’s oil production. As the Americans withdrew their troops, Western companies remained to cash in on the new opportunities.

Michael Brompton QC, who is the lead counsel for the SFO in the trial, described how Unaoil saw the potential the new Iraqi master plan would bring. Unaoil set about recruiting a network of ‘loyal’ Iraqi civil servants – a network that Unaoil could use to help its clients get a head start in the race for lucrative deals.

The ambitious master plan created by MOO included two major projects: the acquisition of three Single Point Moorings (SPMs) to allow tankers to load oil offshore, and two pipelines that would bring the oil from the oil fields to the Persian Gulf. An Iraqi government company, the South Oil Company (SOC), was put in charge of finding suitable suppliers to work with, and a consulting engineer was appointed. As the ‘owner’ of the tender process the SOC could give instructions at any particular stage to the consulting engineer.

The court heard that early on, during the first planning stages of the two projects, Unaoil obtained confidential documents from Oday Al Quoraishi, a high-ranking SOC official, who would soon become Unaoil’s key government contact in Iraq. The jury learned that Unaoil would discreetly offer these illegally obtained documents and its government contacts to a supplier that Unaoil deemed suitable. Unaoil would ‘help’ win the contract in return for a commission, which was based on the total contract price.

In respect to the SPMs, according to the SFO, Unaoil hoped to partner with a Dutch-based company, SBM Offshore. In respect to the pipelines, Unaoil again looked for a supplier to work with, and in this case Unaoil would also become a subcontractor. At first, Unaoil hoped to partner with McDermott, a company headquartered in the United States, but their senior management refused to work with Unaoil due to McDermott’s compliance policy. So instead Unaoil sought a commercial alliance with one of McDermott’s main competitors, Leighton Offshore in Singapore, which is part of Leighton Holdings in Australia.

The SFO alleges that defendants Ziad Akle, Stephen Whiteley and Paul Bond conspired with members of the Ahsani family, who ran Unaoil, and others, to bribe a key SOC official. The Iraqi official supplied Unaoil with documents, specifications, and designs, the jury heard, and the official instructed the consulting engineer on what should be put into the tender document. Unbeknownst to the consulting engineer, these instructions came directly from Unaoil’s clients.

The SFO alleges that Unaoil altered the terms of the tender in such a way that they would not only favour Unaoil’s clients, but also created unfavourable conditions for their competitors. The court heard that at every point Unaoil had intimate knowledge of the opinions and concerns of the consulting engineer, and it appears that Unaoil controlled both supply and demand.

Like the crude oil taken out of the Iraq’s ground, Unaoil’s manipulation appears to have become more and more refined. The jury heard that nothing was left to chance. Those involved devised an elaborate scheme of nicknames and personal email accounts to cover their tracks. According to the SFO, Unaoil intervened at every stage of the tender process, all the way to the final decision by the Iraqi Ministry of Oil. The alleged conduct spans from 2005 to 2011, and over the years about $6 million were paid in bribes in order to secure the two contracts, which were worth $800 million.

The email exchanges heard in court show that Unaoil forwarded the specification to their prospective client, who then crossed out main competitors or unfavourable conditions. Inquiries and notes from the Iraqi official were received, passed on to the client, reviewed, annotated, disguised, cross-checked with the Iraqi official, and then submitted by the official to the consulting engineer — sometimes within a single day. Many of the annotations read as if someone sorting through a closet: “must be removed”, “better to be removed”, “must
stay in”, and “to be kept in”.

The scramble for Iraq’s oil resources by Western companies has left a toxic legacy. Iraq is OPEC’s second largest producer, after Saudi Arabia. 99% of its exports are oil, and oil comprises 90% of Government revenue. Far from bringing wealth and prosperity to Iraq, however, the country remains politically unstable. Some have pointed out the “devastating role that corruption has played in the failure of Iraq and the rise of ISIS”.

Iraq ranks at the bottom 25% of countries listed in Transparency International’s Corruption Perception Index, and the UN estimates that 95% of bribery incidents in Iraq go unreported. Corruption in the Iraqi oil industry is a major factor sabotaging any efforts to help create peace and stability in the country. This is the context in which the Unaoil saga is unfolding.

One concern is that the jury might not fully grasp the destabilizing impact corruption has on countries like Iraq, as this was not specifically addressed in the prosecution’s opening. The damage of bribery extends way beyond the unjust enrichment of those involved in the bribes and those who won the contracts. This crime is not victimless and juries need to know why it matters. It is therefore crucial to provide juries with all the relevant background information that allows them to properly assess the harm caused by the alleged misconduct before them.

COMING TO THE SURFACE

The walls started to close in on Unaoil in 2011, when the Ahsani brothers, tipped off about an investigation into one of their clients, archived more than 250,000 potentially incriminating emails, according to prosecutors, and spreadsheet compiled by the brothers in July 2011 allegedly identified “certain areas of criminal exposure”, including bribes, and other corrupt payments made on behalf of 14 companies.

Allegations of bribery first started to emerge in 2011, when lawyers for Leighton discovered ‘files showing the company had agreed to pay Unaoil ‘not less than $25 million in marketing fees’ to help secure Iraq government projects. The project did not, however, require any marketing. Leighton refused to pay Unaoil and forwarded the files to the authorities. In 2013, Unaoil filed a lawsuit against Leighton in London for breach of contract. One year later, in 2014, the claims were dismissed by a UK High Court judge, with Unaoil receiving damages and compensation.

In 2016, after a leak of thousands of the firm’s emails to journalists at Fairfax media in Australia, the SFO opened an investigation into Unaoil. Nick McKenzie, an investigative reporter for The Age in Australia, began reporting on Unaoil. Month later McKenzie obtained internal Unaoil documents from a whistle blower, who had been impressed with McKenzie’s diligent research. The newly exposed files documented the scale of Unaoil’s business activities.

On 22 March 2016 the SFO opened an investigation, and days later Unaoil’s Monaco offices and the Ahsani homes were searched. The SFO sent an extradition request to the authorities in Monaco, and a European arrest warrant was issued, but the principality of Monaco is not part of the European Union and makes its own decisions on extraditions. In 2018 Monaco rejected the UK extradition request.

Meanwhile the US Department of Justice was positioning itself to cut a deal. Sammy Ahsani travelled to the next closest US embassy in Rome, Italy to meet FBI agents working on the case. As American soil in Italy, the embassy allowed U.S. officials to do this without a formal request for legal assistance, which would have alerted the Italian authorities to Sammy Ahsani’s location.

In the UK, under the Serious Organised Crime and Police Act 2005 (“SOCPA”), an offender may be offered immunity from prosecution (section 71) and a defendant who has pleaded guilty to an offence and assists the investigator or prosecutor in relation to that or any other offence may have that assistance taken into account in the determination of his sentence (section 73).

In both the UK and the US plea deals are subject to court approval. But US laws allow prosecutors to strike plea deals directly with cooperating witnesses, unlike the UK. The SFO could only recommend that a judge treat the Ahsanis with leniency in exchange for cooperation. For the Ahsanis, the path was clear.

In November 2016 the SFO received ‘blockbuster funding’ from HM Treasury for its Unaoil investigation, and, as time passed, the investigation grew to target specific companies – some British, some American – and intensified its focus on the Ahsanis. This led to what appears to be an argument between British and American law enforcement agencies.

At the heart of this infighting is the curious case of the former SFO case controller in charge of the Unaoil investigation, Tom Martin. Martin was dismissed by the SFO last December after being accused of swearing at an FBI agent and calling him a “spy”. Martin is currently taking the SFO to an employment tribunal for unfair dismissal – a case that will take place after the Unaoil trial has concluded.

On 25 March 2019 Saman and his brother Cyrus Ahsani pleaded guilty in the United States on one count of conspiracy to violate the Foreign Corrupt Practices Act (FCPA), and they are scheduled to be sentenced on 20 April 2020 before the US District Court for Southern District of Texas. Another defendant, Basil Al Jarah, pleaded guilty in the UK to bribery offences in 2019. Al Jarah was Unaoil’s Iraq partner and the main link between Unaoil and the Iraqi official, the jury learned.

THE ‘WHO-IS-WHO’ OF OIL AND GAS

McKenzie’s reporting uncovered the scale of bribery in the oil and gas sector, spanning a “global web of bribery and graft” and involving some of the biggest players in the business, as well as politicians and  bureaucrats in multiple countries.

Unaoil operated in several Middle Eastern and African countries. Firms involved in Unaoil’s Middle East operation include some of the most respected Western companies, such as Rolls Royce, Petrofac, FMC Technologies, Halliburton, Samsung, Hyundai, Eni, Sapiem, MAN Turbo, Siemens, and many others. Bankers in New York and London are alleged to have facilitated Unaoil’s money laundering. Prosecutors in the U.S. claim 21 major publicly listed firms, plus six private ones, used Unaoil to help bribe their way into contracts.

The Unaoil case has spawned investigations into various of its big clients. In May 2017 the SFO announced its investigation in the activities of Petrofac PLC for suspected bribery, corruption and money laundering. A former senior executive of Petrofac International Ltd pleaded guilty to bribery offenses last year. The SFO’s investigation into Petrofac’s use of agents in multiple jurisdictions, including Iraq and Saudi Arabia, is ongoing.

Also in 2017, the SFO announced it had opened an investigation into KBR, Ltd, the U.K. subsidiary of New York Stock exchange listed company KBR Inc., another Unaoil client. This is a joint investigation with US authorities.

Rolls-Royce was fined a record £671 million in 2017 for corruption in at least six countries, after an enquiry in which the DOJ specifically looked at the company’s dealings with Unaoil.

Swiss company ABB disclosed to US and UK authorities the findings of an internal investigation into its past dealings with Unaoil. Another high-profile case involving a French Unaoil client, TechnipFMC, ended in a deal with US authorities.

Whether the larger cases of KBR and ABB can be resolved on a multi-jurisdictional basis which includes the SFO remains to be seen. It will be a key test of whether the new relationship between the SFO and DOJ, established after former FBI lawyer and dual US-UK citizen Lisa Osofsky became the SFO’s new director in September 2018, has moved on from the bruising saga involving the Ahsanis.

The trial in the UK is expected to last four months.